The original FF game has more or less been remade now, for mobile devices and more recently, for PC. It's Mobius Final Fantasy, one of those free-to-play, micro transaction games. But it follows the basic story of the Warrior of Light, the same story featured in the NES FF game...or so I'm given to understand. I barely remember the original FF game.

Thanx to the wonders of porting old games, many of the early FF games can now be played again in all their pixelated glory. I've enjoyed the nostalgia of FFVII (I played it on PS1, way back when), got to experience the fun and angst of FFIV and the adorableness of FFIII for the very first time. (I've never had a Super NES or any handheld gaming device, so getting these games on PC was a huge YAY for me.) Several of them can also be found in the PlayStation Store.

And a few of them got brand new, fancy intros just for the PC versions, and possibly the PS4 editions too. Really pretty.


Several of the older games were redone first for PS1 (and many can be had digitally for PS3). I got my hands on brand new copies of FF Origins, which is I and II; FF Chronicles, which includes IV; and FF Anthology, which is V and VI. I can play these on my PS3, though I've yet to do so. The packaging indicates that they have fancy new intros too, so maybe I was wrong about the intros being made for the PC releases, at least in regard to IV. 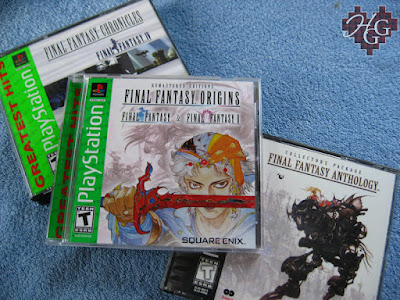 And FFVII. Wow. First video game to make me cry. A lot. I had the original PS1 edition, along with the strategy guide. I was obsessed with that game. I played it all the time, more hours than I even remember now. I was devastated by Aerith's death, and played for hours after that, hoping, praying she'd miraculously come back. Alas, it was not to be. Still, probably my favorite FF game.

FFVIII has a special place in my heart, too. I had the game and the strategy guide, gifts from my hubby when we were newly married. In fact, we were working out of state and he went out and bought me a PlayStation (we'd left ours back home), FFVIII, and the strategy guide. Seems like it was our one year anniversary, but I can't remember for sure—this was 18 years ago.

Funny thing, what I remember most about this game was how impressed I was by the realistic graphics. Now, of course, graphics are so much better, but for the time...damn.

Anyway, while finding the story interesting, as always, I really got into the card game. You know the one... 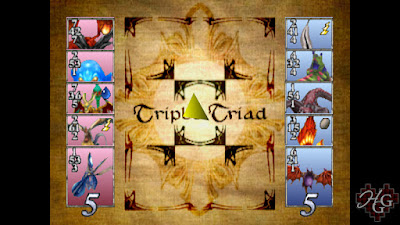 Yeah, I figured that game out and spent HOURS playing it. It was my first experience with a "game in a game." Loads of fun.

Interestingly, this card game is available in the FF Portal App for mobile devices. It's from Square Enix and it's basically just a way to earn points that will net you prizes in your other mobile Squeenix games. One way to earn points is playing Triple Triad.

So what's your favorite FF game? Are you an old school fan? Or is it the more recent installments that bring you gaming joy?

And just out of curiosity, has anybody out there played every single FF game? Including all the mobile games, portable games, console games, what have you? I'd be truly curious to meet such a diehard fan.

*All screenshots/photos here were taken by the HGG; all things FF belong to Square Enix, who in no way endorses this fan site.